EUPATI has developed a toolbox containing a variety of materials on medicine research and development and on the involvement of patients’ community in this process (https://www.eupati.eu/). The European AIDS Treatment Group (EATG) has applied materials from the EUPATI Toolbox in the context of its STEP-UP 2018-2019 programme, during the third training module from 8 to 11 November 2018. This article summarizes the experience of the STEP-UP trainers Tamás Bereczky (EATG, Hungary/Germany) and Giulio Maria Corbelli (EATG, Italy) in using the EUPATI materials in the STEP-UP training. It is based on interviews held by the EATG Training Coordinator with the two trainers on 14 and 15 November 2018.

STEP-UP is a five-module 1-year-long training programme developed and delivered by the EATG. The aim of this bilingual programme (English and Russian) is to equip a cohort of HIV ambassadors with the knowledge and skills they need to assume a leading role in advocating for universal access to prevention and treatment, fighting stigma and discrimination and increasing understanding and acceptance of HIV in their country and at international level.

STEP-UP 2018 brings together 19 trainees from the WHO European region. Half of the trainees come from countries of Western/Northern/Southern and Central Europe (Croatia, Turkey, Belgium, Scotland, Greece, Macedonia, Romania, Germany, Ireland, Portugal) and the other half come from countries of Eastern Europe and Central Asia (Ukraine, Russia, Belarus, Kyrgyzstan, Tajikistan, Kazakhstan). The trainings are held bilingually, in Russian and English, with consecutive translation provided during the training. Depending on the requirements of the respective sessions, they are held with the entire group of participants or the participants are split by language groups.

“It is not enough to complain, it is not enough to shout. You have to know what you talk about and that requires knowledge at least to some extent about the underlying processes and the science that is being done”

Which EUPATI materials were used and how?

A key element for this discussion was the slide flowchart that shows the development spectrum from setting priorities to phase 4 trials. Both trainers highlighted its importance: “it gives a very good structural overview about the various entry points into the research and development process”. The flowchart provides a systematic collection of the various phases and steps where patients can get involved in research and development.

The slide leads the attention of patient advocates to all the various possibilities of involvement in research. One of the trainers noticed that the trainees were interested to see all the possibilities of getting involved but at the same time seemed to be overwhelmed: “Certainly not everybody will find it equally interesting and not everyone will want to invest time and efforts into this. But if there is just a handful of people who are interested and carry on with this tradition this is already useful and good for our work. So not everybody will be enthusiastic, but I am happy if there are some who are enthusiastic about this or interested.”

According to one trainer there is a lot of scepticism on the possibilities for patient involvement in HIV medicine research and development arising from the feeling that nothing much can be reached by the community. The trainers understand this feeling but do not think it is accurate. It depends on which goals you set for yourself and with whom you talk: “It is not enough to complain, it is not enough to shout. You have to know what you talk about and that requires knowledge at least to some extent about the underlying processes and the science that is being done”. It is also important to select the right target group for advocacy: “Talking to the same high-level politicians who do not care will not bring as any further. But if you start this with researchers, if you start this with doctors, […] if you know your audience and if you know what to say to this audience then change is possible” 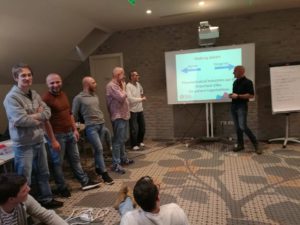 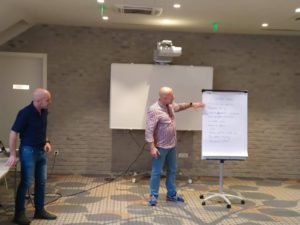 Which elements of the EUPATI toolbox were particularly useful for the preparation and implementation of the training sessions?

When asked what elements of the EUPATI Toolbox they have found particularly useful for the preparation of the training sessions, one trainer highlighted the fact that in his opinion EUPATI is particularly good and useful for explaining the basic principles of research and development: “Sometimes, when you prepare a presentation, you need to explain the framework you are talking about. So, for example if we want to explain patient involvement in R&D there is the general flow of activities in medicines R&D which must be explained. And EUPATI is very useful for me to find a very good slide set to explain the basic concept and framework, the general environment where things are happening. You can further adapt it to your needs, but the general framework is very well described through the presentations.”

The case studies were another example of useful training material highlighted by the trainers, as they show“how the things are applied in the everyday activities of patient organizations”. Depending on the topic, they can be more relevant or less relevant to what needs to be explained but in general they are considered by the trainers to be very useful for both, the preparation and the implementation of the training. During the STEP-UP training the case study of ECAB has been used to highlight how community advisory boards are set up and how they work.

Another advantage of the EUPATI Toolbox that has been mentioned by one of the trainers is that the information is in one place, making it easy to find the relevant material to prepare a training session. The session preparation is further supported by the availability of general instructions on how to put together and systematically develop a training course. One of the interviewed trainers found this particularly useful: “even if I do not follow it word by word, it helps me structuring my thoughts”.

“I tried to extrapolate the most important slides and the most important concepts to include in my presentation. This is more related to the opportunity you are going to use the slide set for, rather to the level of knowledge of the trainees.”

To what extent did the EUPATI materials have to be adjusted to the specific context of STEP-UP?

Both trainers agreed that STEP-UP, being a bilingual training programme bringing together activists from Western Europe, Eastern Europe and Central Asia, required adaptation of the use of the EUPATI training material. As one trainer said: “The EUPATI material […] was developed for a setting where the Western European countries work, mostly under the umbrella of European Medicines Agency (EMA) and under that kind of approach and procedures.” The material can be used to explain the general principles, but it does not explain specific procedures in regions that are not part of the EMA domain. Nevertheless, the trainers highlighted that also in this setting EUPATI can provide a meaningful contribution “[…] it is a good starting point. You can look at the existing structures in the European Union and start from there and try to understand how things are done differently in other parts of the world. “

Consequently, during the STEP-UP training both trainers addressed the general principles of research and development that are relevant for both language groups, “without going into that much into specifics of the procedures”. More specific, procedure-dependent, advocacy steps were then discussed in separate groups, to which participants have been split by regions and languages. In the more specific discussions in these groups, the trainers asked the participants to what extent the processes and procedures, as well as possibilities for community involvement, are different in their countries, compared to the European Union example that is presented in EUPATI.

Besides adapting the use of EUPATI materials to the regional context of the participants countries’, no adaptation of the materials according to the knowledge level of the participants was needed. As one trainer said: “I tried to extrapolate the most important slides and the most important concepts to include in my presentation. This is more related to the opportunity you are going to use the slide set for, rather to the level of knowledge of the trainees.”

What elements of the EUPATI materials could be improved?

Regarding possibilities for improvements of EUPATI both trainers mentioned the EUPATI website. Even though it contains all the relevant material, the material search is not always very intuitive. Therefore, the structure of the website as well as its search function could be improved. One trainer mentioned that most of the material have been developed five years ago and a content update would be needed. Furthermore, more translations would be necessary to be able to offer the EUPATI material in additional languages.

Following-up on the discussion about the adaptation needs of the use of the material when delivering training to participants from EECA countries, the trainers were asked whether they think that EUPATI should address the Eastern Europe and Central Asian (EECA) countries. One trainer strongly recommended expanding to this region: “I understand that the remit of EUPATI is more focussed on Western Europe but nevertheless it could be very, very useful for Eastern European countries to have a tool like that”. However, as the other trainer has pointed out, even though everyone agrees that it would be good to include this region, it would be very challenging to address the variety of Eastern European and Central Asian countries and industry practices in a methodologically meaningful way.

Watch EATG’s webinar on the toolbox